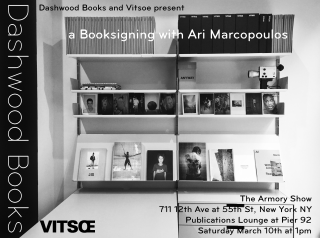 Dashwood Books in collaboration with the furniture manufacturer Vitsoe, announces a book signing by the prolific artist Ari Marcopoulos at The Armory Show Publications Lounge at Pier 92, 711 12th Ave at 55th St on March 10th at 1pm. Marcopoulos will be signing two of his recent monographs by the Amsterdam publisher, Roma - designed by Roger Willems.

Exarcheia Athens, Sunday Feb.5.2017, 13:07-16:51.  Roma, 2017 - $30
Marcopoulos shot this series during one February afternoon in Exarcheia, a neighborhood in central Athens which is famously known as home to Greek anarchists. Each of the 352 photographs are reproduced in sequence and unedited starting 13:07PM thru 16:51PM. Roma's subtle use of fluorescent inks in certain colors on a matte paper stock makes the graffiti stand out on the grey overcast day preserving the memory of decades of resistance to state repression in the district.

Rome - Malibu.  Roma 2016 - $45.50
Published by the independent Dutch publisher Roma in the exact same form as their publication The Xerox Book based on the pivotal 1960s conceptual book by American curator and art dealer Seth Siegelaub in which he asked each participating artist to create 25 pages of work that responded to the photocopy format, which was new at the time.  Rome - Malibu is very much a document of a specific time and place - pictures of the architecture and monuments of Rome, largely without people with a brief section of photographs of the ocean in Malibu at the end.