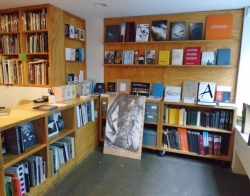 To coincide with the launch of the Directory—a superselective guide of where to shop, eat, and prettify oneself in New York, Los Angeles, Paris, London, Milan, and Shanghai—Vogue.com Contributing Editor Rebecca Bengal pays tribute to New York’s Dashwood Books.

Let us now praise the basements, nooks, crannies, and narrow spaces of the East Village, whose architecture has preserved the physical and metaphoric underground of New York, making possible the continued existence of some of the city’s most idiosyncratic shops: tiny stores devoted entirely to selling only vintage guitars, or custom hats, or cappuccinos and tattoos, or Japanese toys, or Mexican handcraft, or witchcraft. At the border of the neighborhood, on a semi-sleepy block of Bond Street that is also home to A.P.C., Billy Reid, restaurants the Smile and Mile End Deli, and a place where you can sell scrap metal, in one of those aforementioned unassuming below-deck storefronts is Dashwood Books, the city’s only shop that exclusively sells photography books.

Dashwood is not some antique relic of old countercultural New York City; this year, it celebrates a decade in business. Opened in 2005 by David Strettell, the former cultural director of Magnum Photos and onetime assistant to Mario Testino, the store specializes in rare, obscure, and near-impossible-to-find photography titles, both new and old—some culled from Strettell’s own shelves—all making a case for the photo book as object, for photographs which tend to work better collected as a book rather than hanging on a gallery wall. The space itself is small and unintimidating, lined with wooden bookshelves. The phrasecoffee-table book is sort of a dirty word around here, but there’s a distinctly un-snooty vibe. They host signings and book parties. Photographers will stop by to scan the shelves, or to drop off their latest very independently published works for sale.

It’s an afternoon that’s begun like so many others here, stopping by to check out the latest offerings from Twin Palms Publishers and MACK and Steidl, and winding up hanging out for a long while, discovering photographers you’ve never heard of before. “The cover’s not that great, but look inside,” the clerk says, steering you to a book of photographs shot mostly in Cuba, and then to a Viviane Sassen limited-edition book centered on Japan, beautifully haunting shots of African graves, connected to her childhood memories of Kenya.

You think about how Strettell has said he first came to photography, and the worlds of some of his favorites—“Helmut Newton’s chic eroticism, Nan Goldin’s downtown scene, Anders Petersen’s Café Lehmitz in Hamburg, William Eggleston’s Memphis, Robert Frank’s melancholic America”—”they gave you access to places you otherwise really had no hope or business of being exposed to.” It’s an obvious thought, but with Dashwood Books, he’s made a home for all of them.