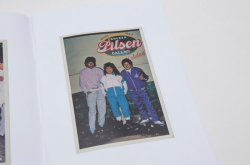 By Olga Yatskevich in Photobooks/ March 4, 2015

"JTF (just the facts): Published in 2014 by Dashwood Books (here). Softcover, 54 pages, with 52 color photographs. First edition of 500 copies. Includes text by Alfredo Villar. The photographs were drawn from the collections of Leticia and Stanislas Poniatowski, Anna Gamazo de Abelló and Alexis Fabry.

Comments/Context: Chicha Dreams is the first photobook featuring the work of Peruvian photographer Nicolás Torres. Coming from Cajamarquilla, a poor working class neighborhood on the outskirts of Lima where he at one time made a living working as a bricklayer, Torres bought a camera in the late 1970s and started photographing birthdays, concerts, weddings, parties, and everything else that paid. He obviously had a good eye for composition, and very soon numerous photo requests allowed him to switch to photography as a full time career. After over three decades of shooting, Torres’ archive is now close to 60,000 negatives. But until recently, his work hadn’t been seen much outside his community and the people he photographed.

Alfredo Villar, the Peruvian art historian and curator, discovered Torres’ work by chance as he was researching chicha culture; he met the artist’s son’ Luis Torres, who later made the first introduction. Villar has a strong interest in vernacular photography and was struck by the charm and innocence of Torres’ visual archive of daily life. In the past few years, Torres’ work has been included in group shows in Lima and in the major exhibition on Latin American photography Urbes Mutantes: Latin American Photography 1944–2013 which was on view at the ICP in 2014 (review here).

In mid 1980s, Torres began working with promoters who were organizing chichaparties, promptly becoming the primary photographer, and Chicha Dreams brings together a selection of the informal portraits Torres made during various late nights. Chicha is a Peruvian version of cumbia (a music genre popular throughout Latin America) and might be best described as a meeting point somewhere between peasant folk music and psychedelic rock, with some extra roughness. Its lyrics often focus on love, and touch upon social and economic hardship, the “informal” economy, and troubles with the police. As Alfredo Villar notes in the book’s introduction, “chicha music is not only music: it is economics, work, partying, life, desire, and nightlife”.

Chicha Dreams offers a curious, unassuming snapshot of these chicha parties, capturing both the improvised atmosphere and the often wild party goers. Torres’ photographs show groups of people, couples, and individuals posing for the camera, most trying their best to appear cool and confident. Hard workers during the day, these people go dancing, drinking, and socializing at night, any day of the week. Most of them look straight at the camera without artifice, happy to be caught laughing, kissing, and enjoying the company of friends (leaving out the frequent fights and shootings Torres also witnessed). Simple deadpan poses reveal small details: the arm in arm comfort of friends, an open zipper, a drunk glassy eyed stare, a casual smoke, an empty beer salute, a tender embrace, a grope, some dance moves, a jaunty hip, a soccer jersey, an Adidas tracksuit proudly worn. Like Malick Sidibé’s images of parties in Mali, the straightforward images capture the joy and energy of nightlife with refreshing authenticity.

Chicha Dreams is a small softcover publication with a clean design. Its cover, bursting with colorful, energetic letters, reflects chicha’s elemental dynamism. All of the image reproductions are the same size, shown one per page with wide white border, so nothing distracts the viewer from focusing on the photographs and people they capture.

Torres’ archive of imagery is a rare find in Latin American photography, in that it shows the working class captured by a local working class photographer. While his approach to photography didn’t initially come from deliberate artistic expression, his sense of color and his intimate, unjudgmental connection with his subjects have enabled him to create a unique visual record of his community in Cajamarquilla. The vernacular photography of Latin America remains largely unseen, so this small volume is an important entry point for those looking to dig deeper.

Collector’s POV: The work of Nicolás Torres doesn’t appear to have either obvious gallery representation or any secondary market history. For the benefit of all, please add the information to the comments area if you know the details."